"There will never be his likes again" 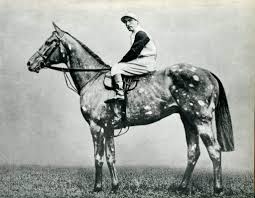 The Tetrarch in his racing days

Unfashionably – even eccentrically – bred, and strangely marked, he was a two-year-old of exceptional merit, a champion sire and, despite being sub-fertile and retired early from stud duties, he wielded tremendous influence on the breed.

A racehorse of blinding speed, though bred to stay extreme distances.

A stallion colossus who proved the cornerstone of an everlasting host of equine celebrities from flying machines to Grand National winners.

The supreme nonpareil giant of turf history known as The Tetrarch was truly a freak of nature and, in his esteemed trainer’s words, “there will never be his likes again”. 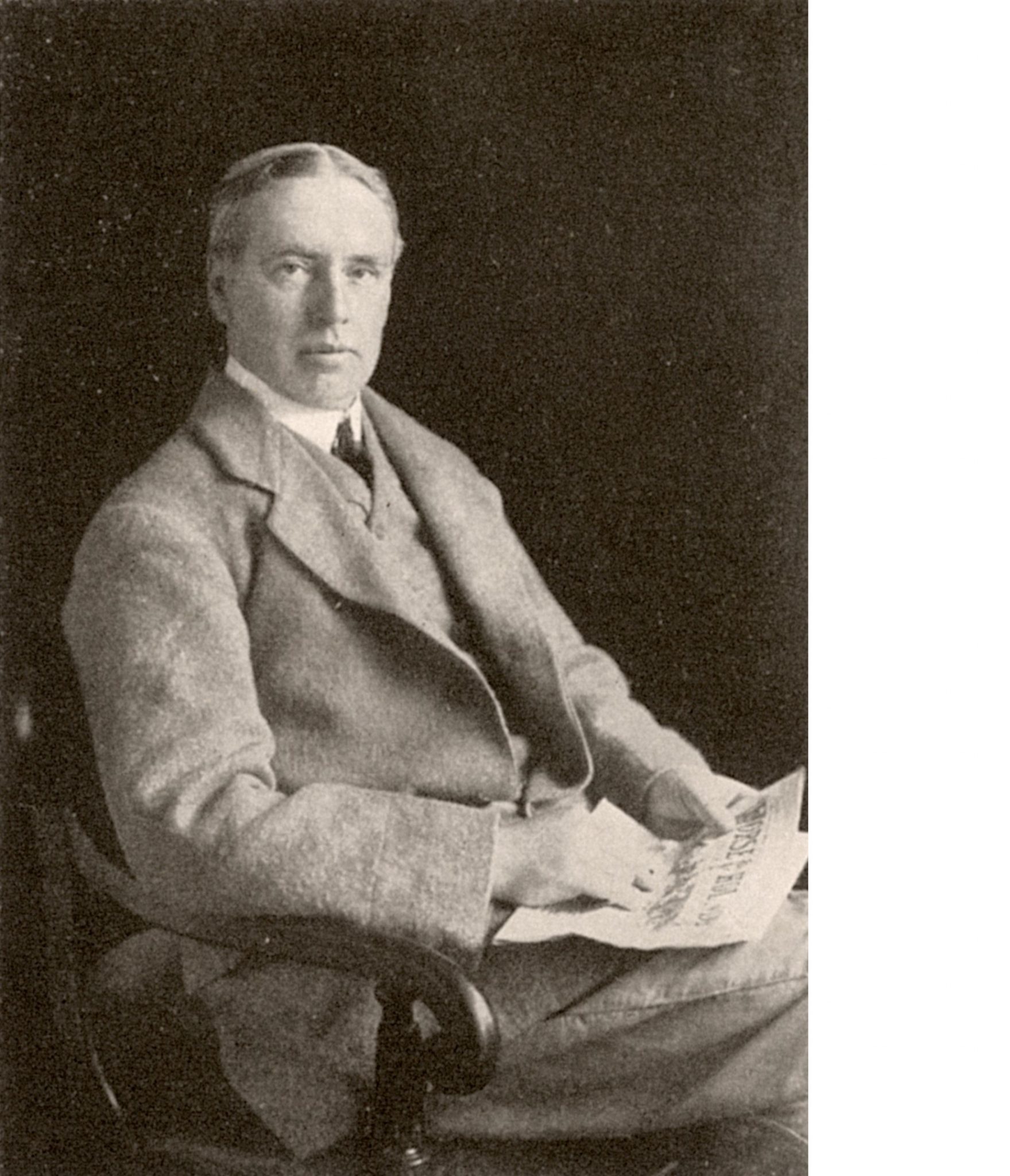 Born in 1911 on April 22nd at Edward “Cub” Kennedy’s Straffan Station Stud in Kildare, not far from where the present Goffs Sales complex is located. The Tetrarch was born chesnut with black “Bend Or spots” (so called after his Derby winning great-grandsire) which later transformed into his famous grey with splotches of white coat, that saddled him with the nickname “The Rocking Horse”.

Every grey horse must have at least one grey parent and The Tetrarch inherited his colour from his sire. A direct line  of his grey ancestors can be traced, like all grey thoroughbreds, back to one grey stallion in the original Weatherbys Stud Book named Alcocks Arabian, who was born around the turn of the 18th century and had his origins in Syria.

When Cub Kennedy hastily arranged liaison of Roi Herode and Vahren in the late spring of 1910, he had been obsessed with the idea of reviving the apparently moribund male line of Herod. Could there be a more aptly named stallion for the job than Roi Herode? It was already nearly three months into the breeding season when Kennedy purchased his new stallion and he had little chance of attracting many outside mares, but he did have a couple due to foal late himself, one being Vahren.

Kennedy decided to send the young Tetrarch to the 1912 Doncaster yearling sales and he knew that for make and shape there would be few to match him. Atty Persse duly had to go to 1,300gns to secure the colt for his patron Dermot McCalmont.

When his jockey Steve Donoghue first saw him he described The Tetrarch as “a sort of elephant grey with big blotches, as though someone had splashed him with handfuls of wet lime”. However, once his brilliance on the racecourse became apparent, it wasn’t long before “The Rocking Horse” became “The Spotted Wonder”, a name that one hundred years on still resonates with horse racing aficionados around the world. 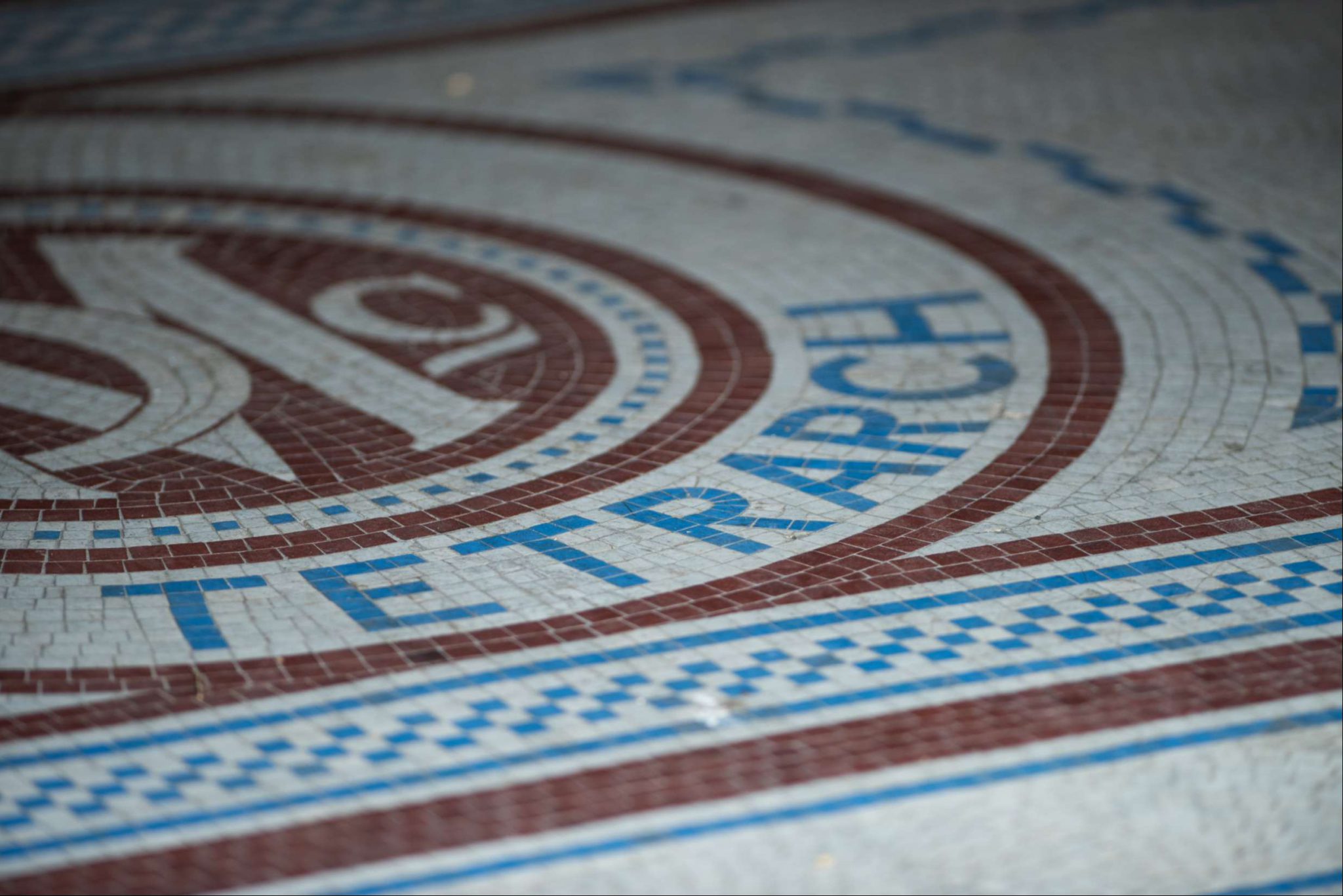 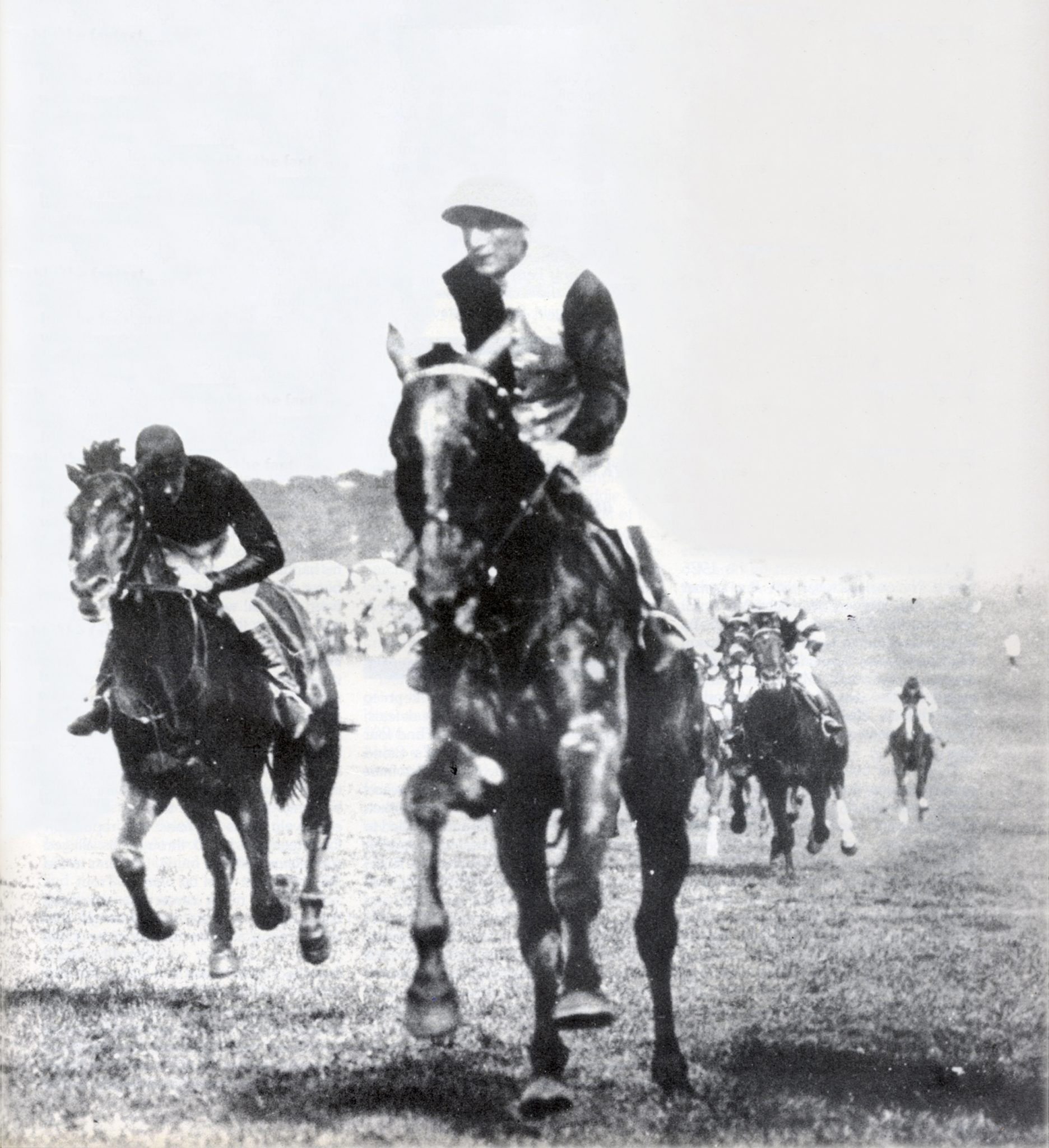 The Tetrarch winning the Woodcote Stakes at Epsom

At the age of two The Tetrarch had developed into a magnificent individual and was showing phenomenal speed on the gallops. He made his first public appearance in a novice plate at Newmarket on April 17th 1913 – just five days short of his birthday and blew his twenty rivals away to win “in a canter” by 4 lengths.

His second appearance was in the Woodcote Stakes at Epsom, traditionally the first six furlong juvenile race of the season, occurred the day before suffragette Emily Davison was fatally injured in the Derby.  The Tetrarch took the race in hand rounding Tattenham Corner and won easily by three lengths, according to the British Bloodstock Review, “It was generally agreed that not since the days of Pretty Polly had a two-year-old accomplished a more impressive performance.”

The Coventry Stakes at Royal Ascot was next, then run at five furlongs, and The Tetrarch won pulling up “with his mouth open”, his closest competitor trailed in 10 lengths behind. On July 19th to packed stands, he lined up for Britian’s richest two year old race, the National Breeders’ Produce Stakes (now the National Stakes) at Sandown. This was the only time The Tetrarch came close to defeat, scrambling home by a neck conceding 17 lbs to the runner-up. What onlookers didn’t know, as poor visibility obscured the view from the stands, was that The Tetrarch was severely hindered at the start. This is an account from jockey Steve Donoghue’s biography, “As the tapes went up, The Tetrarch got some of them tangled in his mouth, causing him to rear. On coming down he cannoned against another horse and fell to his knees. Although his plight had seemed hopeless, Steve set off in pursuit. The Tetrarch almost lifted him out of the saddle with his supercharged power as he came nearer and near his rivals with every stride”.

Just twelve days later The Tetrarch stepped back up in distance to six furlongs at Glorious Goodwood for the Rous Memorial Stakes where he easily accounted for subsequent 1,000 Guineas and Oaks winner Princess Dorrie (in receipt of 13 lbs). He went on winning, the Champion Breeders Foal Stakes at Derby by four lengths, and what transpired to be his swansong in the Champagne Stakes at Doncaster by three lengths, where The Tetrarch treated Stornoway, his only credible rival for two-year-old honours, with contempt. Stornoway had previously won the Gimcrack and Norfolk (now Flying Childers) Stakes.

His season was not meant to end there, but on the day before his intended start in the Imperial Produce Stakes at Kempton he struck into his off-fore fetlock joint, and was retired for the season. Crowned the Champion 2yo of 1913 and rated an unprecedented 10 lbs clear his nearest rival – that season’s Middle Park Stakes winner – The Tetrarch is still considered the greatest juvenile runner of all time.

This view is backed by noted turf historians Tony Morris and John Randall, who rated the best juveniles of the 20th century in their book A Century of Champions, and have no doubt about which horse was top. Nearest to The Tetrarch, were Tudor Minstrel and The Tetrarch’s own son Tetratema. 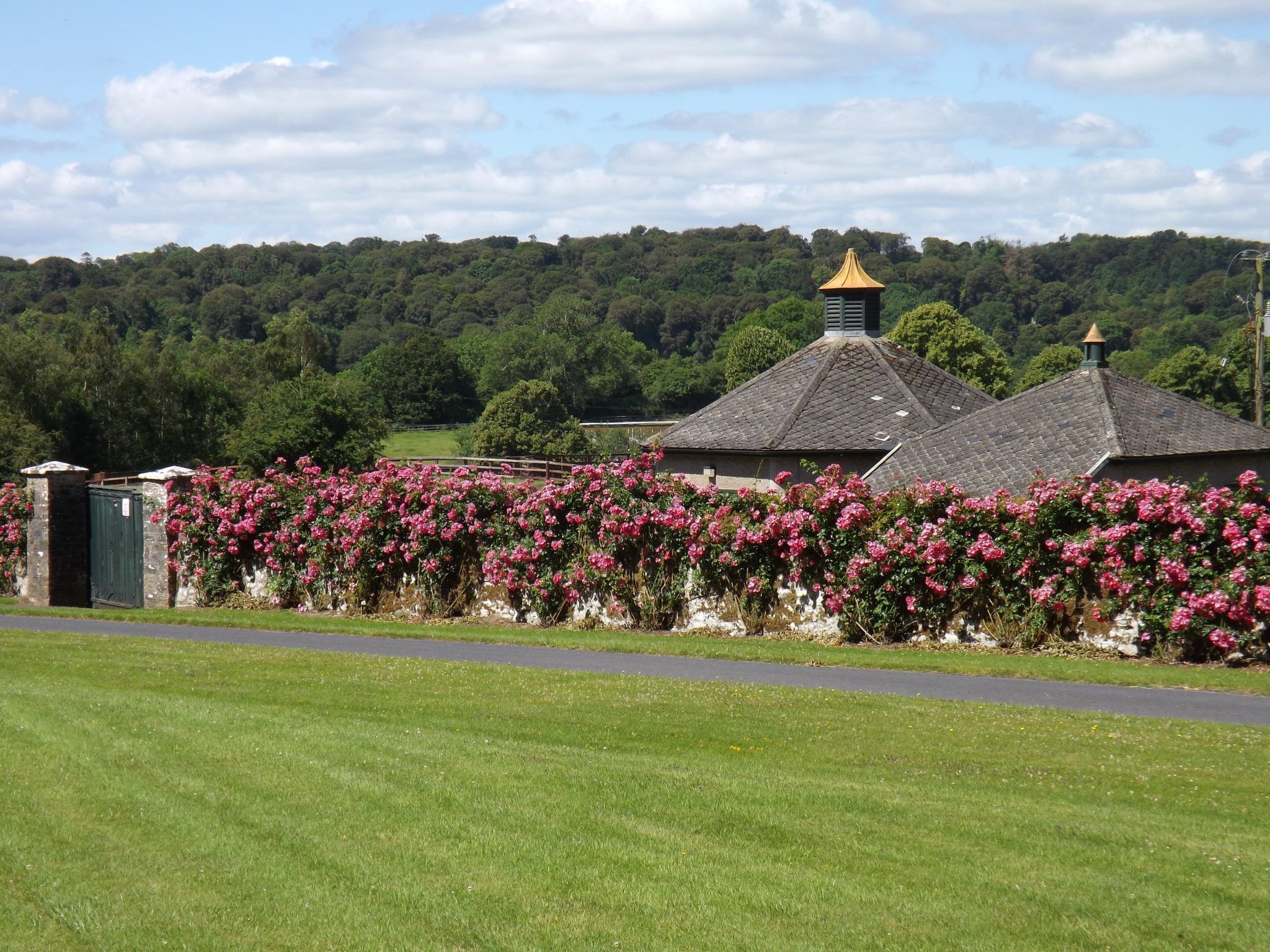 The Tetrarch was retired in 1915 to stand at his specially-built stallion box and covering shed at an initial fee of 300 guineas. However, due to the meditative state he would enter into when presented a mare, his owner eventually described the champion as “monastic in the extreme”. He only got 130 foals altogether, of which 80 were winners, but with such a dearth of opportunity, it is truly remarkable the number of brilliant racehorses The Tetrarch sired.

As might have been expected, a majority of his best progeny were outstanding two-year olds and sprinters such as:

The Satrap Champion 2yo
Winner of 4 races including Chesham Stakes, July Stakes and Richmond Stakes

Paola
Winner of the Cheveley Park Stakes and Coronation Stakes 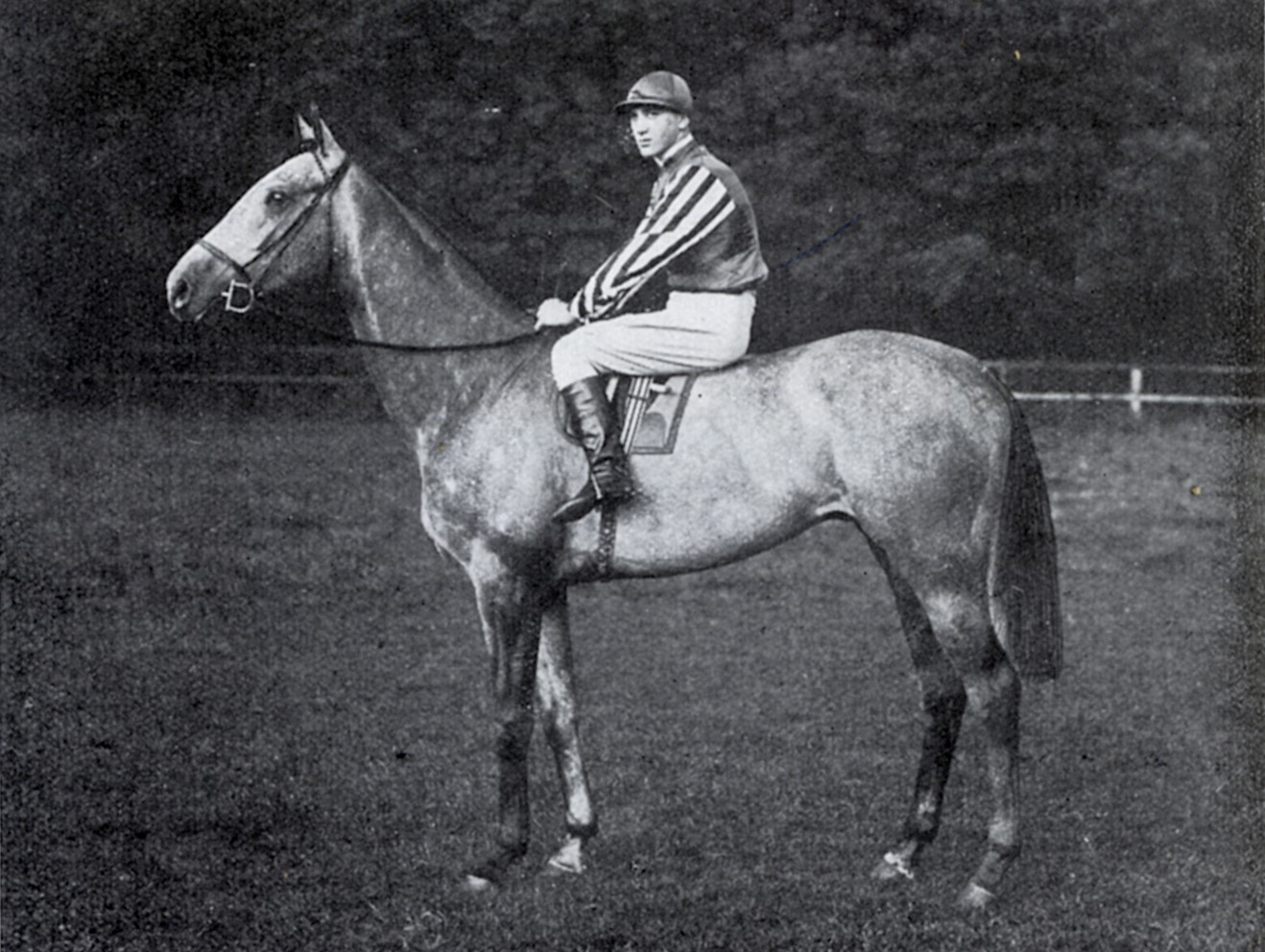 The Tetrarch was also capable of siring top class winners over longer distances:

Polemarch A leading sire in Argentina with 6 Classic winners
Winner of 5 races including the St. Leger, Gimcrack Stakes and 3rd Middle Park Plate

The Tetrarch was also the sire of :

Ethnarch Sire of the ancestresses of Mill Reef and Blushing Groom 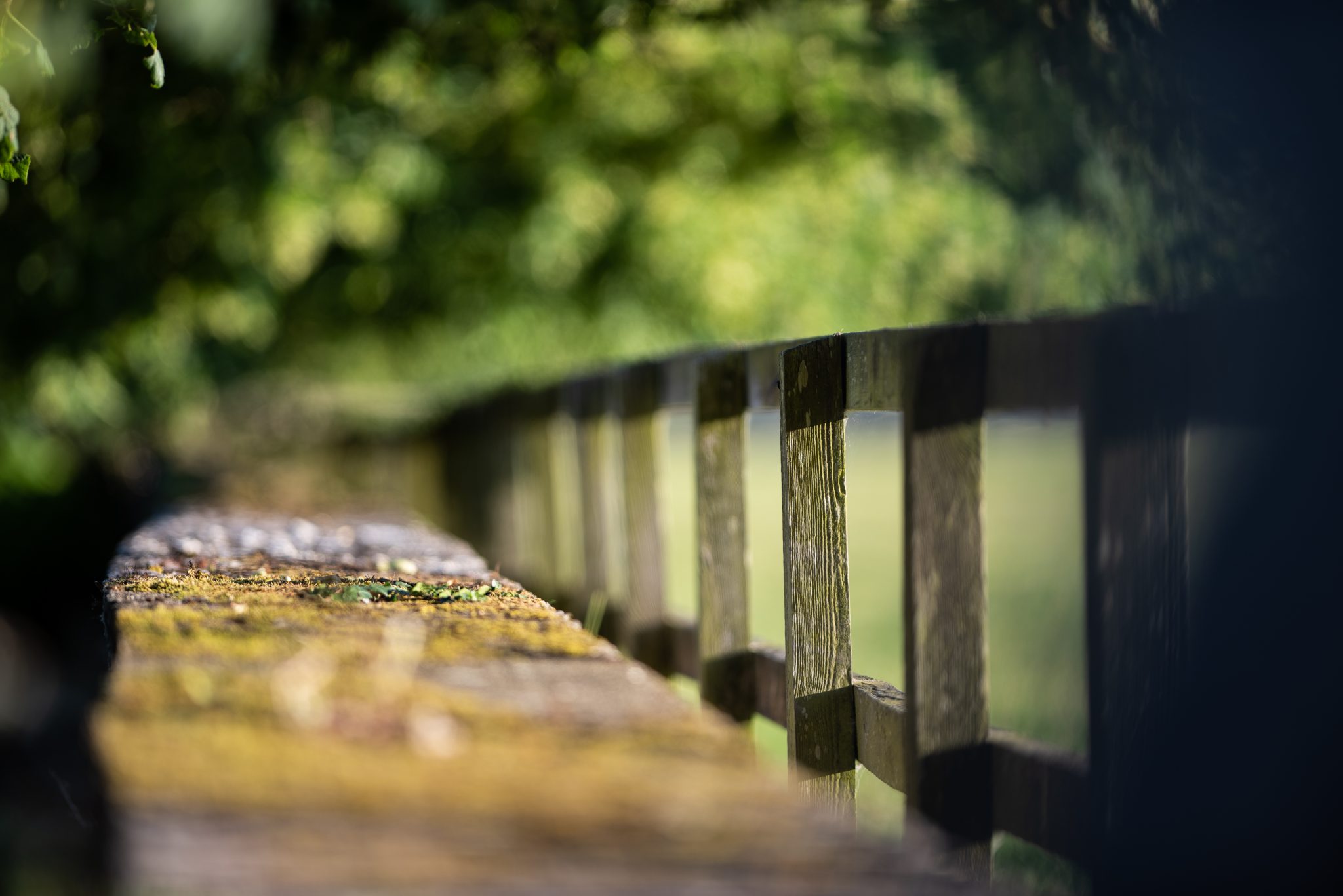 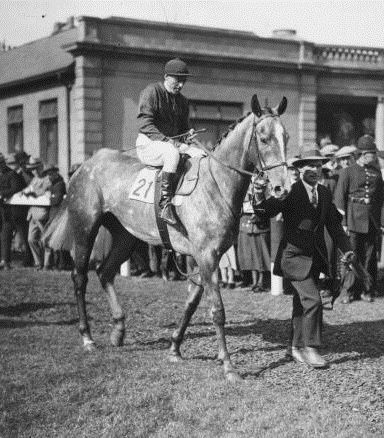 The Tetrarch’s greatest legacy is undoubtedly through his daughter Mumtaz Mahal, purchased as a yearling for 9,100 guineas – the second highest price ever at the time – for the Aga Khan, such was her brilliant speed, she later became known as “The Flying Filly”. A champion 2yo on the track, she was to become one of the most influential broodmares of the 20th century.

Her daughter Mumtaz Begum produced champion racehorse Nashrullah, who was a Champion sire in both Europe and the USA. His sons include Never Say Die, Nashua, Bold Ruler, Never Bend, Grey Sovereign and Red God. Her other efforts include champion 2yo filly Dodoma, who became the 4th dam of Shergar and Sun Princess, the dam of influential sire Royal Charger. Another daughter produced Abernant, champion 2yo and the greatest sprinter of modern times.

Mumtaz Mahal best son was the Mirza, winner of the July and Coventry Stakes, who was seized by the Germans during invasion of Normandy in 1940, went on to numerous stakes winners including Skylarking ancestress of important sires Rahy, Singspiel and Devil’s Bag.

Her other daughters Mah Mahal and Mah Iran, were also hugely influential.  Mah Mahal’s son Mahmoud won the 1936 Derby in record time before being exported to America for stallion duties and becoming Champion Sire. His lasting legacy will be as the broodmare sire of Almahmoud – grandam of Northern Dancer. Her other descendants include French Champion Sire Arctic Tern, American Champion Sire Halo – sire of Japanese Champion Sire Sunday Silence, and Champion Australian and European Sire Danehill.  Mah Iran was the second best two-year-old filly of 1941 and became the dam of Migoli, winner of the Prix de l’Arc de Triomphe, Eclipse Stakes, Champion Stakes, and second in the Derby. Migoli’s full-sister, Star of Iran produced the grey filly Petite Etoile, winner of the 1,000 Guineas, Oaks, Sussex Stakes, Champion Stakes and Coronation Cup. She is the fifth dam of Prix de l’Arc de Triomphe winner Zarkava.

Other exceptional racehorses that descend directly from Mumtaz Mahal include Fillies’ Triple Crown winner Oh So Sharp, Champion Sprinter and Champion 3yo Habibti and Australian Champions Octagonal and Danewin. 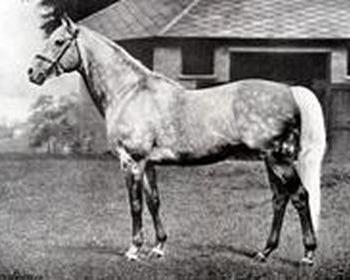 Born at Ballylinch in 1917, Tetratema was a winner of all his twelve starts over sprint distances but also won the 2,000 Guineas for good measure. After an incredible debut in the National Breeders’ Produce Stakes, he took in the Molecomb Stakes, Champagne Stakes, Imperial Produce Plate and Middle Park Stakes on the way to being crowned Champion 2yo.

He began his 3yo career as the first grey to win the 2,000 Guineas since 1838, but failed to stay in both the Derby and Eclipse Stakes. Dropping back to sprint distances he won the (now discontinued) Fern Hill Stakes at Royal Ascot and the King George Stakes at Glorious Goodwood, where he accounted for 1,000 Guineas winner and exceptional sprinter Diadem.

As a four year old he won the King’s Stand Stakes at Royal Ascot, before taking the July Cup at Newmarket and repeating his win in the King George Stakes. Tetratema made his swansong in the five furlong Snailwell Stakes at Newmarket before retiring to Ballylinch in 1922 at the same initial fee as his sire, 300 guineas. 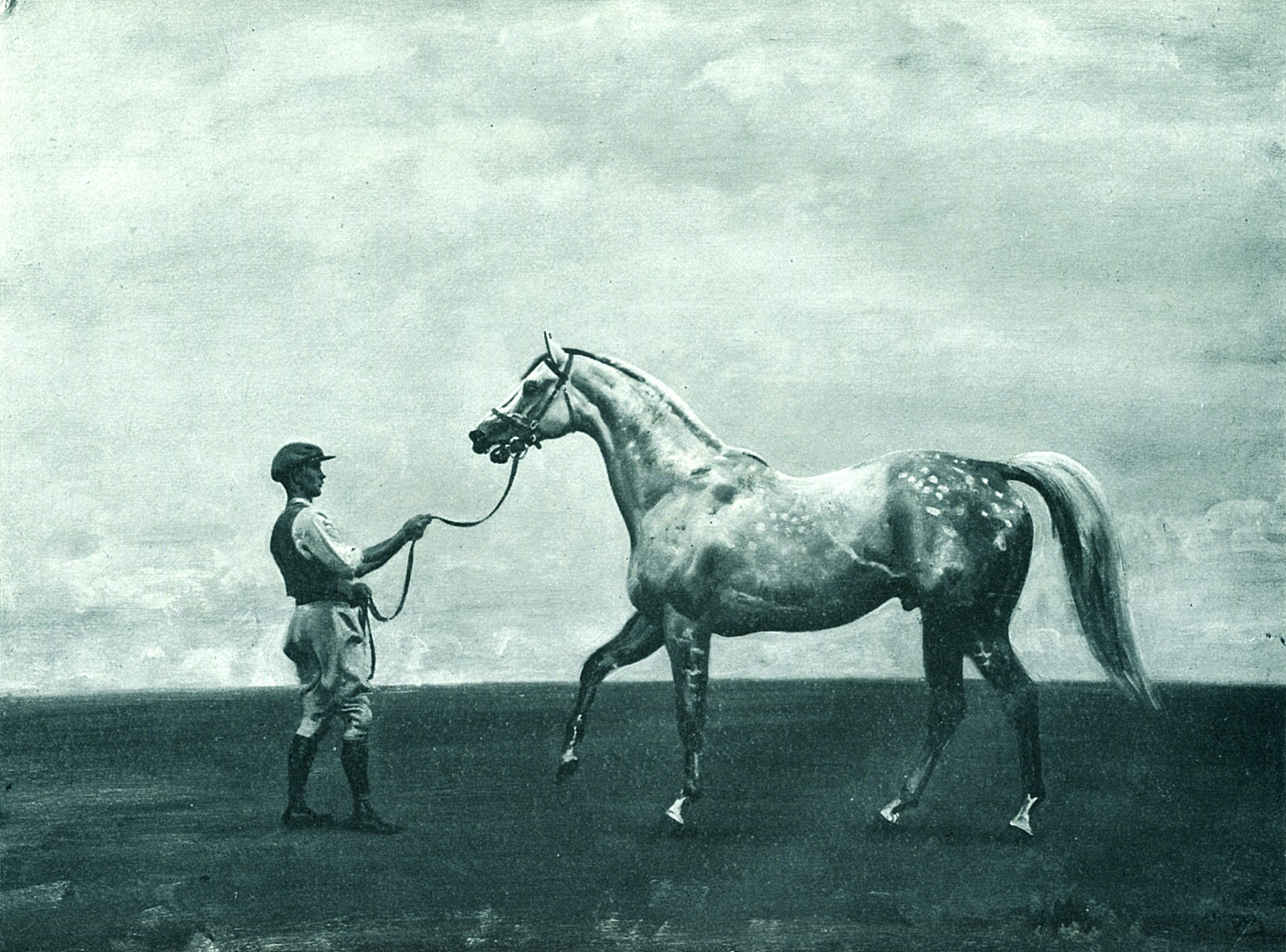 In 1929, he emulated his sire by becoming Champion Sire – the same year his daughter Tiffin became Champion 2yo and his son Mr. Jinks was the highest rated colt. In all, Tetratema was a top 7 sire on 11 occasions.