The first foals of Ballylinch Stud’s Arc hero Waldgeist made quite the impression in sales rings before Christmas and that positive start was sustained here, with the only two foals in the session by the son of Galileo selling well.

Both were consigned by Ballylinch Stud, which is establishing itself as arguably the most significant independent stallion farm in Europe, with a roster of exciting young stallions looking destined for the top.

First of their Waldgeist weanlings through the ring was a half-brother to Brown Sugar and Burnt Sugar, who won successive renewals of the Group 3 Sirenia Stakes for the Hannon team.

Their dam Lady Livius was fourth in the Listed Kilvington Fillies’ Stakes and is a half-sister to the granddams of two classy juveniles from 2021 – Oscula, who won the Prix Six Perfections, and Mill Reef winner Wings Of War. The late April foal was bought by Baroda Stud for €50,000. 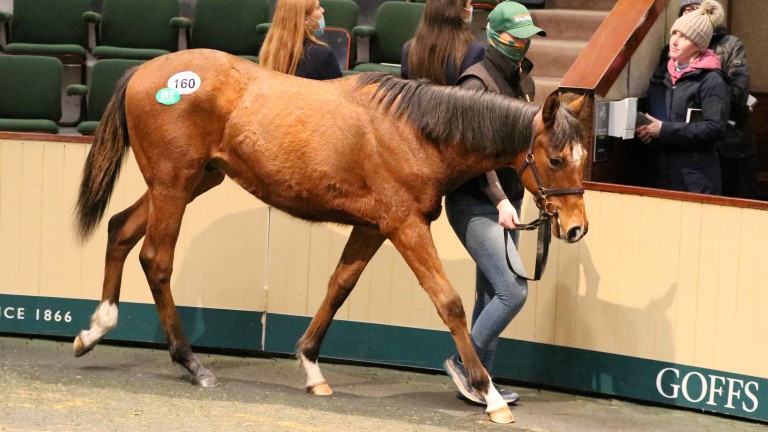 Lot 160, the Waldgeist colt out of Modeeroch from Ballylinch Stud who was purchased for €85,000 by Ronald Rauscher – Peter Mooney

The second of the duo ended the day as the most expensive weanling sold during the first session, when making €85,000 to Ronald Raucsher, who revealed the colt will be returning to the land of his ancestors.

“This horse is very nice, not exactly a pinhooker’s foal, but he’s for an end-user in Germany so is going back to his homeland,” he said.

“He has a very good demeanour and a very good step to him, which I liked a lot. He has a nice frame and is an excellent advertisement for the sire, and well-presented by Ballylinch, needless to say. The page is strong so basically he had it all and I hope he’s going to be lucky.”

That page is one of Ballylinch’s most prolific sources of black-type success. The colt is a half-brother to the Group 3-placed filly Moteo out of Modeeroch, a triple Listed winner by Mozart. She is a three-parts sister to the Cheveley Park and Lowther Stakes-placed Danaskaya, who is the dam of Group 1 winner and sire Belardo and the Scandinavian Group 3 winner Berling.

Originally appeared in the Racing Post on February 8th 2022.