The only maiden in the line-up for Goodwood’s Listed British Stallion Studs EBF Cocked Hat S. on Friday, Normandie Stud’s Lionel (GB) (Lope de Vega {Ire}) emerged on top of a tight finale to step into the frame for the Irish Derby. Sent off at 17-2 on the back of a promising third behind the re-opposing Natural World (Ire) (Frankel {GB}) and the subsequent Listed Fairway S. winner Ottoman Fleet (GB) (Sea the Stars {Ire}) in an 11-furlong Newbury maiden Apr. 16, the bay was settled with one behind early by Jamie Spencer as Frankie Dettori dictated on Aldous Huxley (Ire) (Dubawi {Ire}). Off the bridle before the turn for home, the chestnut kept responding to build a head of steam and wear down that 7-4 favourite in the final yards and prevail by a neck, with Lysander (GB) (New Approach {Ire}) half a length away in third. 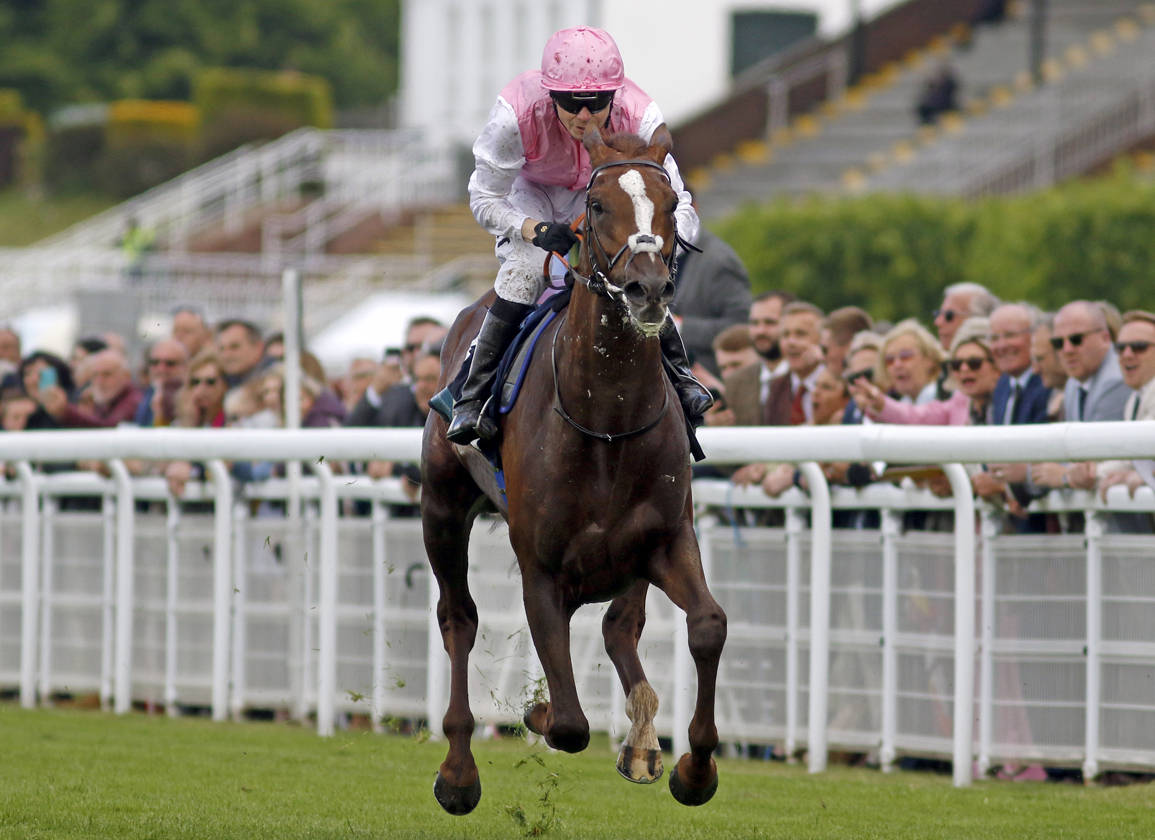 Lionel’s trainer David Menuisier is aiming high now. “He is in at Royal Ascot and he is in the Irish Derby and he is in the Grand Prix de Paris in July. At the moment, when I say Ascot, I can’t write off the Queen’s Vase. I can’t write off the King Edward VII and can’t write off the Irish Derby,” he said of the winner, who was withdrawn from the Derby. “He had no luck at Newbury. I think he is a very good horse, I have always said that, but he wants to be a grown up to win at Epsom and he is not. I think he will handle any ground, but I don’t want it to be too quick on unconventional tracks. On a nice, big galloping track, he will be fine.”

“Doncaster in September is a good possibility. The dam won a group 2 there and he will stay well in time, but he has got the pace to win over one mile and four. I think the Curragh over one mile four sounds like a good idea. He is entered in the Arc and entered everywhere.” Lysander was not immediately ruled out of the Derby, with Harry Herbert saying, “It wasn’t a bad run, but the ground was too soft for him. He had a hard race, but I would hold on to those Derby tickets a while longer. We will see how he takes this.

As Menuisier stated, Lionel is the first runner for the G2 Park Hill S. and Listed Chalice S. winner Gretchen (GB) (Galileo {Ire}), a daughter of Dolores (GB) (Danehill) who captured the Listed Conqueror S. here and was second in the G2 Sun Chariot S. and third in the G1 Coronation S. Her sons Duncan (GB) (Dalakhani {Ire}) and Samuel (GB) (Sakhee) enjoyed career-highs when dead-heating in the G1 Irish St Leger and winning the G2 Doncaster Cup respectively, while another daughter Deirdre (GB) (Dubawi {Ire}) was third in the Listed Height of Fashion S. on this card in 2010. She has the unraced 2-year-old colt Gregory (GB) (Golden Horn {GB}) and a colt foal by Kingman (GB).

by Tom Frary – Originally appeared in TDN on May 20